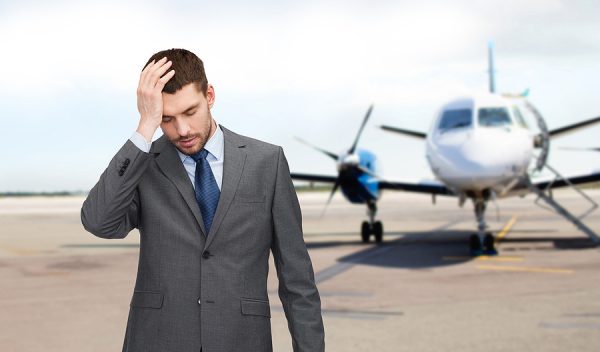 If you flew anywhere last summer, you know how crazy things got. There were record-setting flight delays and cancellations. Many people were stuck in travel hell for days on end.

Things have settled down quite a bit since then. Still, high travel demand, limited flight availability and winter weather could result in chaotic cancellations and delays during holiday travel. So in addition to the time you spend on the airplane itself, you could find yourself hanging out in airports a lot longer than you would like.

Between the stress caused by potential delays, and being trapped in a huge tub of germs for hours at a time (think of your plane as a giant petri dish), the chance of getting sick within a day or two of reaching your destination is high.

So my #1 tip for flying is to bolster your immune defenses before, during and after travel.

With this in mind, I recommend arming yourself with a bio-active silver hydrosol prior to flying. My go to brand is Argentyn 23 or Sovereign Silver. This is something I use on a regular basis, whether I am flying or not.  It’s an antiviral, antibacterial and immune system booster. And it can help keep you from getting sick and run-down while travelling.

In preparation for your flight, I recommend taking one teaspoon three times a day under your tongue as your travel date nears. (Hold it for 30 seconds before swallowing.) Then, on the day of travel, take it every four hours or so to give yourself an extra boost – up to seven times daily. As well, I spray it up my nose before I walk in to the air terminal.

Once you arrive at your destination, go back to one teaspoon three times a day for your best chances of avoiding a viral infection.

#2 Tip for Flying: Eat and Drink for Hydration

I don’t know a lot about planes. But I do know that aircraft cabins are generally set at about 75% of atmospheric pressure. This lowers the oxygen levels in your blood and can make you feel tired, off-balance and headachy.

You might think a cup of coffee will help keep you perked up and relieve that headachy feeling. But it can actually make things worse. Caffeine restricts blood flow to the brain, which further reduces the amount of oxygen getting into your brain cells. So it ends up amplifying the effects of low oxygen.

Alcohol won’t help, either. It interferes with your cells’ metabolism so they are less efficient at taking in oxygen. You’ll just end up feeling more badly than you did to start with.

Even worse, both caffeine and alcohol are dehydrating, and that’s the last thing you want when you are on a plane.

Believe it or not, cabin air is dryer than the Sahara Desert. It has to be to prevent structural damage to the surrounding aluminum shell due to moisture. Airplane cabins typically maintain a humidity of around 20% or less, while the Sahara has an average relative humidity of 25%. This makes dehydration a major issue when traveling by airplane.

In fact, it’s estimated that that when flying at altitude, the body loses somewhere around a half pint of water an hour. So you’ll want to replace that lost fluid by drinking eight ounces of water or more over the course of each hour.

But don’t count on in-flight services to come around often enough to support your water intake. You’ll be better off purchasing one or two liters of water after passing security to drink on the plane. (You might also want to bring along a probiotic nasal solution and some natural tears eye drops to keep your nostrils and eyes moist.)

And by the way, you’ll want to take a hard pass on those salty chips, peanuts and pretzels they hand out on airplanes. All they will do is dehydrate you even more.

I like to pack a nutritious snack when I fly, like lean turkey, chicken or cheese with some celery sticks and gluten free crackers. A bag of mixed nuts is always a good idea, or a zip lock bag full of cut up veggies. And it’s easy to grab an apple, banana or other fruit to enjoy at leisure.

The protein will help keep you feeling full during a long day of travel, while the fruits and veggies are hydrating and nutritious.

Or, if you prefer, pick up a nice fruit salad or veggie wrap just before boarding. Nearly anything is better than a couple of stale packs of salty pretzels.

Have you ever noticed that when you’ve been flying for a while, your feet and ankles start to swell? There is a simple explanation for that. When you sit for a long period time it causes blood to pool in your legs and feet.

To make matters worse, the lower oxygenation in the cabin can affect your body’s natural clotting response. Taken altogether, this not only leads to swelling of the lower limbs, but also to an increased risk of blood clots.

So take a walk up and down the aisle every half hour or so. And while sitting, give your feet and ankles a little exercise. Lift the front of your feet off the ground while keep the heel anchored. Do some ankle circles or raise your legs one at a time like you are marching in your seat.  The more you move, the better your oxygenation and blood flow will be.

Last but not least, there’s a really weird thing that happens when you fly. As the air pressure in the cabin drops it causes the gasses in your body to expand. This leads to bloating, constipation and gassiness.

So as a fourth and final tip for flying, it’s a good idea to avoid gassy foods like carbonated beverages, beans, cruciferous veggies, fried foods and dairy for 24 hours before you hit the skies. Otherwise you may feel like a beach-ball by the time you get off the plane.

These tips may not be able to offer you a quick and smooth journey, but they can certainly help you arrive with your energy levels and health intact for the holidays.