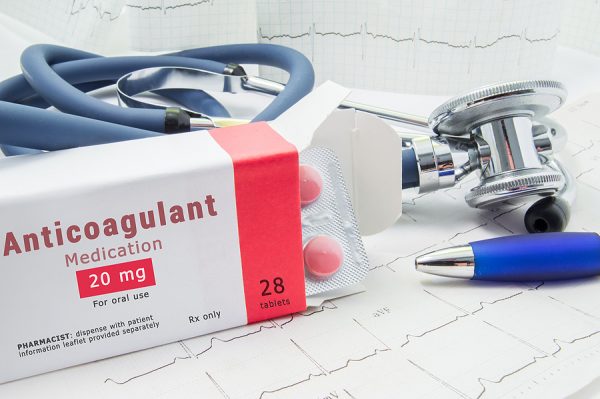 Millions of people take blood thinners to prevent blood clots that can lead to a heart attack or stroke. But combining blood thinners with aspirin can be risky business.

Taken on their own, blood thinners can cause excessive bleeding from even the simplest injury, like a paper cut or stubbed toe. A minor bump on the head can result in intracranial hemorrhage. So, just like all medications, they come with risk.

Warfarin (Coumadin) is the oldest and most commonly used. But we also have the newer ones; apixaban (Eliquis), dabigatran (Pradaxa) and rivaroxaban (Xarelto).

These are referred to as direct oral anticoagulants (DOACs) and are supposed to have a lower bleeding risk. But since they don’t have a very long track record of use, it’s hard to say if that is true or not.

That being said, data from a 2019 analysis of atrial fibrillation patients taking any sort of anticoagulant indicates bleeding risks may be similar among all classes of blood thinners.

The analysis compared these new anticoagulants against warfarin and here’s what they discovered.

So taking an anticoagulant alone – whether it is warfarin or one of the newer blood thinners – will increase the risk of bleeding complications. There is no getting around that. It is a matter of risk versus reward.

But when you combine the antiplatelet activity of aspirin with an anticoagulant, the risk of bleeds is amplified.

A Greater Risk with Deadly Rewards

For decades I’ve warned my patients and readers against the use of aspirin. If aspirin attempted to come onto the market today, I don’t think it would never be allowed on the market.

The risk of ulcers, gastrointestinal bleeding and intracranial hemorrhage are just too great. (In many cases, these bleeds are so awful that patients require blood transfusions.)

Still, a lot of patients on blood thinners are taking aspirin without a clear reason for it.

It’s estimated that almost 40% of patients with atrial fibrillation or venous thromboembolism who use warfarin also take aspirin without any real reason for combination therapy. And nearly a third of patients treated with DOACs are unnecessarily taking aspirin.

This is a huge problem!

It leads to higher rates of major bleeding events. It also results in more emergency room visits and hospitalizations for extremely serious bleeding complications that could result in death.

On top of that, taking aspirin with an anticoagulant doesn’t even make it less likely that you’ll develop a blood clot. So aspirin adds a great deal of risk but offers no reward at all.

If you have atrial fibrillation or venous thromboembolism and your physician recommended taking aspirin with your blood thinner, talk to him or her on your next visit. They may just be misinformed or practicing “old school” medicine.

Plus, in some cases, people who were originally taking aspirin for heart protection are later prescribed an anticoagulant, and none of their health care providers ever told them to stop taking aspirin.

And if you added aspirin on your own without consulting with your doctor because you thought “more was better,” it’s time to discontinue that misconception. Because when it comes to thinning your blood, more is definitely NOT better.

As always, talk with your doctor for what’s best for you.