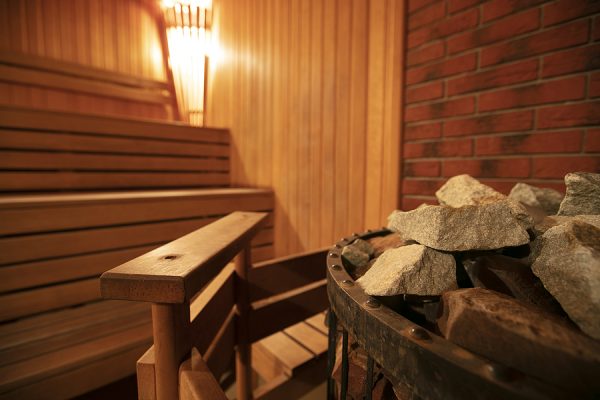 The Scandinavian people have been sweating their way to great health for centuries. It’s a hallmark of their culture, especially in Finland. These guys have somewhere around 3.2 million saunas for a population of 5.5 million Finns.  So that’s one sauna available for nearly every two people in the country.

Most Finns – about 90% of them – take to the sauna at least once a week. Sometimes more frequently. And as crazy as it sounds, they often roll naked in the snow or plunge into icy water afterwards!

It might sound insane, but there is a method to their madness. The sudden cold helps reduce inflammation, ease pain, improve blood flow and activates brown adipose tissue which helps reduce body fat.

Sweat the Toxins Out of Your Body

Our bodies are full of pollutants and toxic waste. Arsenic, cadmium, lead and mercury accumulate in our bodies and slowly damage our health and organs. Phthalates and bisphenol A (BPA), which are found in all sorts of plastics and household products, also build up in the body. And they are just as bad for you.

Research out of Canada shows that sweat contains 1.5 to 3 times higher concentrations of arsenic than blood plasma. Lead is also found in higher concentrations in the sweat. And for mercury and cadmium, it was discovered that more of these metals are excreted from the body through sweat than urine.

The same goes for phthalates and BPA. Concentrations of phthalates was twice as high in sweat as in urine. And BPA has been found in the sweat of people who don’t even have detectable levels of it in their blood or urine. So that says a lot!

What better way to sweat out those toxins than in the sauna? Plus, you’ll get a boatload of other benefits.

The regular use of a sauna is great for your cardiovascular health. The heat helps reduce blood pressure, improve blood flow, boost the health of your blood vessels, enhance your cholesterol profile and lower triglyceride levels.

Routine trips to the sauna could also protect you from Alzheimer’s disease and dementia. In fact, when researchers followed a group of Finnish men for 20 years, those who took part in two to three sauna sessions a week slashed their risk of dementia by a whopping 66%.

How to Get Started

Keep in mind that a sauna isn’t the same thing as a steam room. In fact, traditional Finnish saunas are relatively dry air, with only 10% to 20% humidity. So you want to find a low humidity sauna that uses either a wood burning stove or operates on infrared.

I like the far-infrared saunas because the heat penetrates the skin more deeply than traditional saunas. Instead of heating the air around you, the infrared light basically goes directly into your body.  So they can operate at much lower temperatures than a regular sauna.

This makes them a great choice for people who have a hard time dealing with the heat of a traditional sauna.

And there’s a trick you can use with these far-infrared saunas to get more toxins out of your body.

First, scrub your skin and take a cool shower. Then get into the sauna for five or 10 minutes. You’ll come out with sweat all over your skin.

Scrub again, take another shower, then go back into the sauna for another five minutes.

When you are done, give your body a final rinse in a warm shower to cleanse the toxins and oils off your skin so they don’t get reabsorbed. Just before you get out, give yourself a blast of cold water to seal off your pores.

Start off slow. It’s not a good idea to sweat out a ton of toxins all at once. Plus, your body will need to adapt to the heat stress. Gradually build up to 15-minute sessions.

And remember! Your body is going to lose a lot of fluid. So make sure to drink plenty of water before, during and afterward. You want fresh water coming in and toxin-laden sweat going out.

While saunas are generally considered safe, be sure to talk to your doctor before starting. Sauna may be contraindicated for certain conditions such as a recent heart attack, lung disease or other serious health concerns.