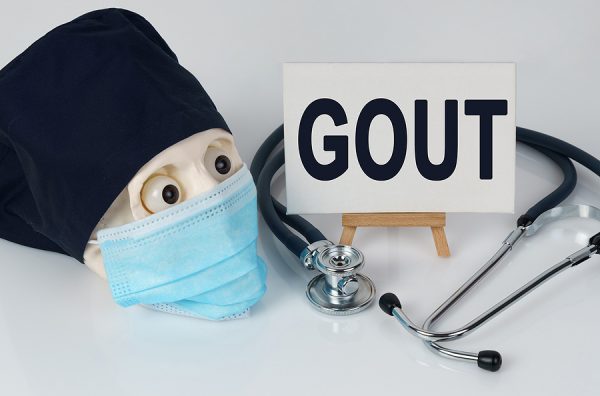 Even though gout is quite common, it’s one of the most misunderstood forms of inflammatory arthritis.

Gout is caused by a build-up of uric acid in the body, a condition called hyperuricemia (pronounced hyper-yur-i-see-me-ya). This causes solid uric acid crystals to form in joints that results in excruciating pain.

The thing about gout is that the flare-ups occur on an irregular basis. They can happen suddenly once or twice a year. Maybe even less. In chronic cases, flare-ups will occur more frequently. And in either case the symptoms can last anywhere from a few days to a couple of weeks.

So it’s easy to think of gout as something of a painful mobility disorder during flare-ups… and forget all about it during periods of remission.

But unfortunately, hyperuricemia isn’t only about gout. It’s about your cardiovascular health, too.

When LDL particles become oxidized it makes them even more inflammatory. This injures you by blocking arteries and restricting blood flow to your heart, brain and other organs.

At the same time, it robs your body of vital nitric oxide (NO). This naturally occurring gas helps relax and expand your blood vessels so blood can flow freely through your body. When you don’t have enough NO it can damage your arteries, contribute to plaque build-up and cause a dangerous increase in blood pressure.

All things taken into consideration, it’s no surprise that gout patients are at higher risk of heart attack and stroke than those without it. But the connection between uric acid, gout and cardiovascular health may be even more serious than we previously thought.

In a recent study out of the U.K., researchers performed a retrospective analysis on the connection between heart attacks or strokes and recent attacks of gout.

They went through medical histories and found patients who had gout flare-ups. Then, they identified those who experienced a cardiovascular event, and those who didn’t. What they learned was startling.

They discovered that a gout flare-up doubles the risk of a heart attack or stroke within the next two months. The risk continues to be about 1.5 times higher through the third and fourth month after a flare-up before returning to normal.

As if that’s not bad enough, they went on to find out if there was a link between gout and death from heart attack and stroke.

So as far as I’m concerned, a gout flare-up is like the red light on your car. It’s blinking, a warning.  “Hey, your engine is going to seize up unless you do something about it”. And it’s a good idea to heed that warning.

Get Your Uric Acid Under Control

If you’ve never had your uric acid levels tested, it would be a good idea to ask your doctor for the simple blood test on your next visit.

But don’t despair if your levels are high. There are several things you can do to bring your uric acid levels down and enjoy a long, healthy and active life.

First and foremost is to eat a healthy, plant-based diet. Both a Mediterranean style diet and the DASH diet have been shown to reduce uric acid levels, reduce gouty attacks, and are associated with better cardiovascular health.

In the meantime, here are some specific foods and beverages that you want to watch out for.

At the same time, include more of the items below to help clear excess uric acid from your body.

I also recommend supplementing with 1,500 mg of vitamin C daily. This not only has a significant effect on your uric acid levels, it can also cut your chances of gout by almost half. Adding 500 mg. of quercetin each day can further slash your levels of uric acid.